The Model 261 - First Board Level Programmer

The Model 261 board level programmer (BLP) was first delivered to Bell Labs/Western Electric in 1981 and later to Sperry Flight in 1982. The BLP was housed in a desk-type console and based on an earlier design from Data I/O founders, Milt Zeutschel and Gordy Nichols. It was the first of its kind and able to program up to eight (8) boards at once, with each up to 36 PROMs. Below is a 1982 article that appeared in a company newsletter describing the Model 261.

BOARD LEVEL PROGRAMMER TO BE DELIVERED IN MAY

As microprocessors and microprocessor-based products become more complex, the demand for program storage (in PROMs) increases. The need for greater and greater volume programming of PROMs has led to a demand for a new technique. Because of Data I/O's reputation as a leader in PROM programming, Bell Labs/Western Electric approached us to design a new production programmer for them in 1980. Pleased with the success of that unit, Bell Labs ordered two more board level programmers and enhancements and arranged for an upgrade of the original unit.

Engineer Don Vendetti, along with Ray Chan, Dan Germain and Nello Blair have been working for 8 months to produce this special programmer for Bell Labs/Western Electric. The programmer is different from Data I/O's usual product line in several respects. Larger and more sophisticated, it is housed in a desk-type console. Instead of programming PROMs separately after they are inserted in a programming socket, the Model 261 Board Level Programmer programs PROMs already soldered into circuit boards. This board level programming can be accomplished using a special card cage which connects the edges of the circuit boards to the programming electronics. Up to 8 boards can be programmed at once, each with up to 36 PROMs.

The operator can select from different "profiles" (defined by the customer) for programming different types of boards and different types of PROMs. All of Data I/O's usual testing of devices and verification of data is performed by the BLP and errors and failures are reported at a CRT. The BLP is controlled by an operator using the CRT which prompts him in English commands. The programmer reports any failures by the location of the individual PROM on the individual circuit board, to allow quick repair.

Data is stored on floppy disks and files are managed using the dual disk drives. The BLP can also be interfaced to host a computer for transfer of data. Programming and error data can be recorded by the printer for later review.

The BLP was based on the earlier special design done by Milt Zeutschel and Gordy Nicols for Bell Labs and Western Electric. After delivery of two Model 216s in May, the original board level programmer will be returned to Data I/O for modification to include enhancements contained in the 261.

A second contract with Sperry Flight for a board level programmer calls for delivery in mid-October. Continued strong customer interest in the new capability makes board level programming and exciting new opportunity for Data I/O.  - Mary Blackstone 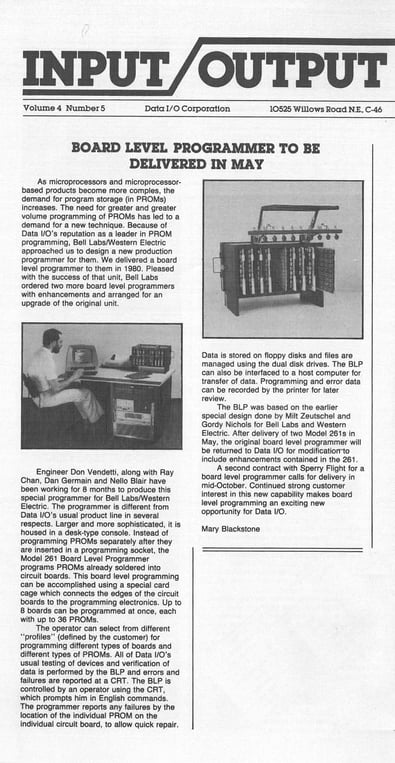 Data I/O provides a fun, yet challenging environment where employees can work directly on or work to support leading-edge products in the industry, working alongside enormous talent in a small company, with direct visibility to senior leadership and ability to impact the bottom-line.  Learn more!